Tap to Text Us

Biogas Plants – An Introduction To The Advantages Of Anaerobic Digestion

The idea of adopting AD has been around for probably at least 90 years in the UK as an energy provider. It not until energy prices rocketed in the 1990s that it was thought that it might be commercially viable, and the first UK plants were seen then as more of a potential means of:

Even though the basic AD process has been used for many years in sewage sludge management, and was increasingly used in Europe as a major contributor to green energy production from specially grown biocrops, the technology back then was unreliable and the economics meant that it was not viable to develop it on a commercial scale.

In Germany, where many farms have in the past received generous subsidies from the German Government to grow maize as a biomass feedstock for AD, there are now more than 3500 plants and by 2010 they are in principle capable of generating power which is equivalent to about a quarter of the UK’s current domestic energy production.

We will describe the process by reference to a common on-farm biogas plant method which is commonly used.

Dairy herd, or pig slurry and food waste are mixed to a porridge-like consistency and heated to 70°C for one hour to ensure that any pathogens are destroyed. The mix is then fermented for approximately an avaerage of 30 days in a gas-tight vessel.

Within these fermenters the naturally occurring micro-organisms break down the organic matter to produce a methane-rich biogas.

The biogas is converted to electricity and heat through a combined heat and power engine. The spare electricity after plant and farm demands are met, is fed into the National Grid. The average plant of this sort can produce sufficient power for 500 to 1,500 homes.

The heat is re-used in the process for pasteurisation and for keeping the fermentation vessels at a constant temperature which allows the fermentation bacteria to grow and produce gas efficiently. The remaining product is a nutrient-rich bio-fertiliser, which is stored on site until weather conditions and season permit spreading on the farms land in place of fossil-fuel-derived fertilisers.

The Benefits Of Anaerobic Digestion

A pivotal benefit of the system is the fact that it provides an in-demand solution to the UK food waste disposal problem and by diverting organic waste which otherwise would have to be sent to landfill assists local authorities in meeting their targets on waste recycling. Let’s not forget either that with the landfill tax now (2012) at £57 per tonne, and due to rise annually on an tax price “escalator” to £80/toonne, the AD option begins to look cheap.

There is such a huge potential for AD plants to treat food waste, because the vast majority of the UK’s food waste currently ends up in landfill where it degrades in an uncontrolled manner, releasing methane which is 22 times more damaging to the environment than carbon dioxide. Leachate is also produced in landfills, which is potentially a very polluting liquid that is also costly to treat. But, perhaps the most forgotten benefit of not putting food waste into landfill is that it provides an attractive habitat for vermin and scavenging birds in landfill. This makes it a major contributor to the bad-neighbour reputation of landfills, and it’s removal will have untold benefits for those living near landfills.

AD is suitable for treating and disposing of a wide range of organic materials and is also able to confidently treat waste to standards required by the Animal By-Products Regulations. On-farm food waste plants can be designed as integrated units to accept a mix of feedstocks that include slurry and both packaged and non-packaged food waste.

AD takes place in the absence of air inside fully enclosed vessels. By definition the operator is not exposing any part of the process directly to the atmosphere, thus eliminating or significantly reducing odour which can only be generated during digester feeding and discharging operations. These odor sensitive points can be handled in a way which will not allow the emission of odors by making the delivery and discharge bays enclosed, and by the use of ventilation fans which deliver the air they collect into odor treating filters before emitting the ventilation airflow to atmosphere.

A well designed AD process cannot emit any potentially polluting run-off either, as all waste water is contained and treated within the process to form part of the nutrient rich bio-fertiliser output.

The principal advantage of AD over other biological treatment processes, such as composting, is that AD produces renewable energy. Other technologies (like composting) can be energy-intensive users of fossil fuels, whereas AD uses self-generated energy for the process, and has a valuable output of both electricity and CHP heat.

Anaerobic digestion produces energy in the form of biogas, which is a useful fuel for engine-driven generators. Another benefit is that in comparison to other technologies an AD facility requires a smaller footprint than, for example, an in-vessel composting facility for the same throughput capacity.

Food and animal wastes are processed in an environmentally sustainable way which preserves an age-old cycle of re-use of plant nutrients, while using the energy which falls on the farmland from the sun via photsynthesis to produce renewable electricity and a nutrient-rich bio-fertiliser. The fertiliser is used in a circle of recycling. When the fertiliser is taken up in the crop and returns to the AD plant as plant matter the circle is then complete. if you think about it, what starts out in food production ends up in food production once again, and it is a never ending self powered closed loop.

If you are considering undertaking all the stages of design, planning, environmental licensing and construction of an AD plant, and find it daunting then we would be pleased to hear from you, (use our Contact Form) to provide us with your basic requirements, and ask us to provide information on our AD plant consultancy service. 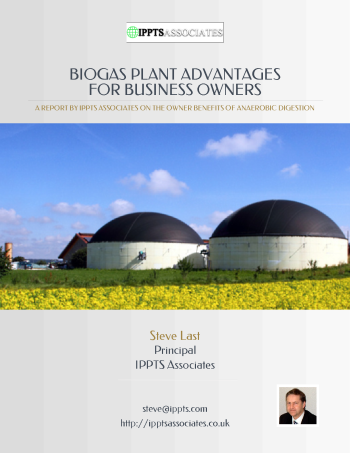 We have compiled a more detailed ebook on the same subject as this web page, for our readers. It is freely available for downloading by clicking the download button below:

This website uses cookies to improve your experience while you navigate through the website. Out of these cookies, the cookies that are categorized as necessary are stored on your browser as they are essential for the working of basic functionalities of the website. We also use third-party cookies that help us analyze and understand how you use this website. These cookies will be stored in your browser only with your consent. You also have the option to opt-out of these cookies. But opting out of some of these cookies may have an effect on your browsing experience.
Necessary Always Enabled
Necessary cookies are absolutely essential for the website to function properly. This category only includes cookies that ensures basic functionalities and security features of the website. These cookies do not store any personal information.
Non-necessary
Any cookies that may not be particularly necessary for the website to function and is used specifically to collect user personal data via analytics, ads, other embedded contents are termed as non-necessary cookies. It is mandatory to procure user consent prior to running these cookies on your website.
SAVE & ACCEPT
Loading Comments...